It’s early morning in dry season. Third squad sits cross legged on a carpet of bamboo leaves. We light small chunks of C-4, boil water in canteen cups, mix in powdered coffee, drink and savor the bitter brew. We make jokes, toss C-ration cigarettes to our Kit Carson Scout. His name is Diem Diem but we call him Jim Dumb. Seventeen, thin and dark complected, on patrol our former enemy walks third in line. “Beau coup NVA,” he says, spotting week old enemy foot prints. But we like this black haired, dark-skinned young man and treat him with respect.

D’wee was better. On point he walked fast and signaled danger by flicking his wrist. He knew the jungle’s dark secrets, and kept us safe. But D’wee is dead and now there’s Jim, who smokes and smiles and wouldn’t know a bunker complex from a ’55 Chevy.

Jim Dumb drops the slender five butt packets into a clear plastic bag filled with Newport Menthols, Winston Filter Tips, No Filter Camels, Lucky Strikes, and green US Army matchbooks whose small print shouts “Close cover before striking.” He crinkles the bag shut, drops it into his pack, plucks the cigarette behind his ear, stuffs it into his mouth, lights it, takes a long drag, spews out smoke, strokes his hairless chin, looks at me.

He means ‘Doc.’ How can you not like this harmless young man?

I take my camera out of a water proof sack and shoot him. The flash creates a story book of shadows and silhouettes. I crawl over and teach Jim magic.

“One finger here. Other hand there. Looky, looky. Press,” I say, narrating with gestures.

Jim Dumb angles the camera, playfully tilts it up and down, lost in its angular cross hairs. It’s clear he will soon chop off my head. 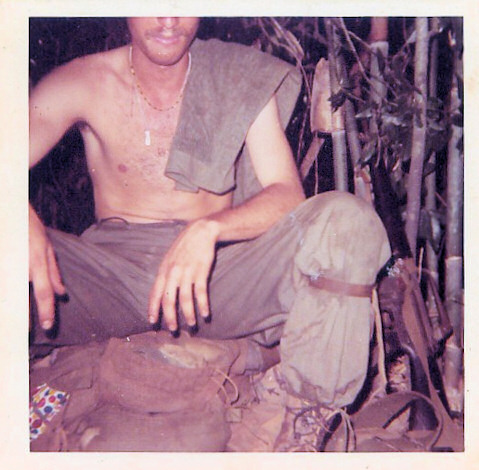 I smile a Jim Dumb smile, the unreliable Kit Carson Scout presses the shutter button, then slams himself flat to the ground. In the distance: a single sudden pop, a dazzling light, machine gun fire, the forest shakes when the mines explode. We grab our rifles and hug the earth. A hundred meters west, first platoon lays down fire as the trip flares bright magnesium kiss illuminates the forest. The lieutenant leaps up.

Ten of us run, crouch, push, sway, step quickly, quickly. We do not feel the razor-like bamboo cuts, the sharp bite of wait-a-minute vines, we ignore the leeches that drop from trees. We run and run until we see it.

Three NVA are screaming. They shriek because they cannot fire their weapons. They howl because soon they will be dead. From close range GIs take pot shots. Take pot shots at men who have no legs.

I kneel down. Salty tears streak my face. It’s only my second time in combat. Soon I’ll be different. Soon revenge for our dead and wounded will meld with fear and I will help with the killing and the killing will help me. We’re just regular grunts, we’re not elite. But after a time we learn the rhythm of this war. This war dance. Wait. Engage. Disengage. The men call it contact, movement or bringing scunnion. The men psych themselves up. “Time to kick ass and take names,” they say. And between contact and kicking ass or having our asses kicked there is tension. It starts small, then builds and builds until we secretly pray it will happen. That we walk into them or them into us, or we mortar them or they rocket us, then the tension explodes like perfect sex, and afterwards… afterwards we’re spent. Days, weeks, nothing happens, then terror, instant and deep, then relief, like paradise, since the killing is done and the living have buried the wounded and dead. Until it starts all over again.

I watch as the bodies are scavenged for souvenirs, then stacked one atop the other. Watch someone slip a short fused grenade beneath the hideous pile. Listen as insects, drawn by the scent, swarm to feast.

“Move out,” says the lieutenant. And one by one we march past the unblinking eyes, the open mouths, the stiffening faces.

“NVA,” says Jim, slitting his neck with his index finger.

We stop and listen then continue forward.

This site uses Akismet to reduce spam. Learn how your comment data is processed.